Vox & Sermo is Michael Stanley's newest project and band name for an, amongst others, The Seeds, The Beatles, Beach Boys, REM, Muse and Clash inspired songwriting exercise. Vox & Sermo focuses the songs on the vocals and choir arrangements, together with laid back guitar, bass, organ, synthesizers and drum tracks. At times also the mellotrone and classical instruments are used. Michael Stanley's musical base is well settled in the 60's which also is reflected in the song arrangements, with a typical 60’s songs build up including some very short songs, some even below 2 minutes. But at times experiments are conducted, e.g. in the song “Leading” where only A verses are used. In “Leading” the variation of the verses are then handled through major guitar and choir arrangements. Also the Tonebender Fuzz pedal finds its way into the late 60's inspired song "My Way". 60's inspired ballads can also be heard in the songs "She Would Say" and "Wonder", favorites among the female teenager fans. In the song "The Storm" excessive synthesizers are used, together with distinctive drum tracks, by some compared to acts like e.g. MUSE.

Listen to the songs at www.myspace.com/voxsermo. Also available on most streaming sites. 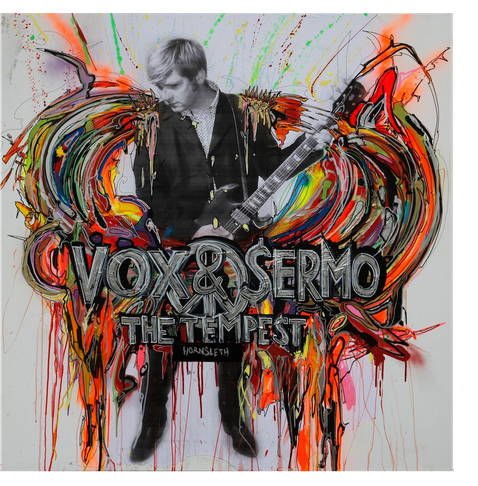 (includes booklet showing the creation of the record cover)

Sale in the EU:

Sale in the rest of the world:

Sent a mail to voxandsermo@live.com with number of CD’s to be shipped, shipping address and you’ll within 48 hours receive a mail with bank details for a bank transfer. When the payment is received the new Vox & Sermo CD will be sent to you.

Working on the record cover together with Kristian von Hornsleth.

The Seeds, The Beatles, Beach Boys, The Clash, Argent, REM

The debut album includes 13 songs. All songs are written by Michael Stanley. All instruments are played by Michael Stanley, except drums by Flemming Olsen on track 1-12 and Mellotron by Tim Christensen on track 4. Recordings performed at the Stanley Studio, Lausanne, Switzerland and the Ark Studio, Copenhagen, Denmark. The songs for the album has been mixed by Globus Studios, Copenhagen, by Per Lange and mastering by Jan Eliasen from Audio Planet, Copenhagen. The record cover has been produced in London in collaboration with the controversial Danish artist Kristian von Hornsleth, and the process of the making is part of the Vox & Sermo project, which thereby has evolved into a combined music and art project. The album signed by the art cover artist Kristian von Hornsleth can be bought for 100 EURO (signed and numbered) . Also on request an art poster of the album cover (A2 format) signed by both Kristian von Hornsleth and Michael Stanley can be bought for a price of EUR 500 Euro (DKK 3750,-/USD 550,-) and includes shipping.